“Decentralization theater” is something which crops up in my inbox on an almost daily basis. By this I mean the development, release and marketing of software which leverages decentralized infrastructure for one, several or even most of its components, but not all of them.

Preston Byrne, a CoinDesk columnist, is a partner in Anderson Kill’s Technology, Media and Distributed Systems Group. This op-ed is part of CoinDesk’s Policy Week, a forum for discussing how regulators are reckoning with crypto (and vice versa).

See, for example, Bitclout for one instance of decentralization theater in action. Bitclout has long traded on its claims to be a “decentralized,” blockchain-based social networking system. At the time of its launch, CoinDesk breathlessly reported:

BitClout is not a company. It is a proof-of-work blockchain designed for running social media. It was created by an anonymous group of developers. Backers only hold its token, BTCLT. Nevertheless, a set of prominent investors and crypto businesses have bought in.

This was not, in fact, true. Prior to launch, those navigating to Bitclout’s webpage would see the following message:

Having run more than my fair share of blockchain clients in the past several years, when I navigated to Bitclout’s site it was immediately clear to me that there was no node. I was navigating to a webpage, hosted on a web server, a server which, in Bitclout’s case, was hosted on Google Cloud.

From a technical standpoint, Bitclout’s go-live a short time later did not make it any more or less decentralized than its pre-launch. Famously, Bitclout scraped the profiles of 20,000-odd Twitter users, including my own; pre-populated its own website with our profiles; and then awarded balances of “creator coins” to each profile, presumably to induce creators to claim the balances and begin generating content for the site.

Unimpressed, and being a troll, I tweeted a cease-and-desist to the real identity of Bitclout’s founder, Nader al-Naji:

Dear @nadertheory: you do not have my permission to use my name and likeness to sell shitcoins. I demand that you remove this misleading and deceptive page from your site immediately.

Please confirm in writing that this has been removed. pic.twitter.com/yILsbpiQyX

Fewer than 24 hours later, my profile was gone:

Update: "prestonjbyrne" on Bitclout is ded

How did that happen if it's a decentralized system, I wonder? pic.twitter.com/Z6qEU7USBz

Of course, it didn’t actually disappear from the Bitclout blockchain; it was merely deindexed by the Bitclout UI (user interface). The fact that Bitclout could deindex my profile from its site tells us that it is not the blockchain or the users, but Bitclout’s site admin who is in charge of the platform.

Part of the reason I feel confident pooh-poohing Bitclout on this point is that the OGs have all known that if you want to decentralize social media, you can’t just print an altcoin (which sometimes goes by a more unsavory, scatological term) and call it a day. You have to decentralize, i.e. eliminate, the webservers themselves. Bitclout has a webserver, ergo it’s not decentralized.

A little-known fact is that before I ran a law practice, I – as part of a team of three including lawyer-coder Casey Kuhlman and quantum mathematician Dr. Tyler Jackson – designed and built the first Ethereum DAO back on the POC3 testnet in 2014.

Being the least software-proficient of the group, my role was mainly to write the paper and provide some of the legal-structural considerations. The product was called “Eris” and it was basically a decentralized version of Reddit. It included voting, discussion, moderation and content posting functionality. 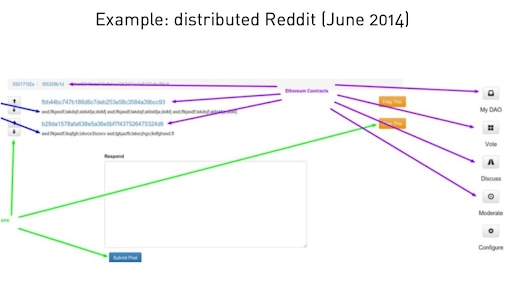 The objective of the exercise was to develop a system that could eliminate all centralization. At the time, we wrote:

Where Bitcoin was designed to solve this problem in relation to point-of-sale and banking transactions, [we are] working on solving this issue for internet-based communications, social networking and community governance – bearing in mind that for free internet services such as e-mail, social networking, search and “open data,” intrusion into users’ private lives and the accumulation and centralization of vast quantities of personal information in centralized silos is not some minor and ancillary nuisance[…]. As such, Eris is not another web service; Eris is significantly different because it has been designed and implemented specifically to not use [web]servers.

Back in 2014, our issue was that we were nearly a decade too early; layer 1 architecture capable of being amended by majority vote had yet to be built (hard forks only), the problem decentralized social media fixes simply didn’t exist, and VCs regarded social as something of a “death zone” where existing behemoths like Twitter and Facebook controlled the battlespace. Nobody needed, or even wanted, to express themselves anywhere else.

Put another way, in 2014, nobody needed decentralized social media, because it was still a time when the internet could be described as free and open. That’s before GamerGate, before Trump, before Brexit and before successive rounds of increasing corporate censorship and mass media partisanship.

Fast forward to the present day, and I take several calls per week from entrepreneurs, some funded, some not, looking to decentralize aspects of social media. All recognize that Web 3 won’t use web servers, because web servers are a point of contact on which a regulator or a tyrant can apply pressure to get the entire service taken offline.

In an increasingly politically volatile world, the need is for software that will continue to run, as Bitcoin does, regardless of social or legal pressure – state-driven, mob-driven or corporation-driven – directed at the system as a whole. The software will need to be architected in such a way as allows serious unlawful use to be targeted and excised (if necessary node-by-node) but makes lawful use very difficult to obstruct. This will likely be a mix of self-hosted infrastructure for content and decentralized infrastructure for coordination.

What will Web 3 look like, then? At minimum, it will be entirely peer to peer. A blockchain need not serve a role, as we see with Mastodon’s federated model, but it could provide some function – either as publicly accessible PKI infrastructure (similar to Mastodon or Microsoft’s ION Digital ID) or accounting infrastructure (which rewards the provision of the service’s infrastructure, similar to Helium). The blockchain will likely not host content, a task better left to users.

For so long as quasi-decentralized services possess even a scintilla of centralization, regulatory pressure can and will be applied. Any centralized infrastructure could be leveraged to eliminate the decentralized product. Eventually, however, and soon, someone is going to figure out the precise mix, the secret sauce, of how to build, and incentivize the continued provision of, user-friendly, wholly decentralized apps, with all functionality being run on a client running locally on users’ own machines rather than via a web server.

As a lawyer, I’m often asked what sort of regulation is appropriate for Bitcoin and crypto. Usually I shrug my shoulders and say that existing regulation works perfectly well – mainly because, having worked in the crypto space since 2013, I have a good sense of what’s decentralized versus what’s decentralization theater. We are fast approaching a point, however, where there will no longer be decentralization theater. At that point, the actors our laws traditionally relegate – in social media, finance and other verticals – will have ceased to exist. After that point, crafting new laws – laws that allow the state to satisfy certain minimum standards for operating that infrastructure in civilized society on the one hand, but do not crush innovation completely on the other – will be a challenging task indeed.

Stablecoins Not CBDCs: An interview with Rep. Tom Emmer

Kristin Smith: Crypto Is Too Big for Partisan Politics